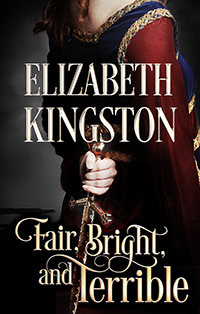 A signed paperback of Fair, Bright, and Terrible

Wales is conquered, and Eluned has lost everything: her country, her husband, her hope. All that remains is vengeance, and she will stop at nothing to have it. Certain there is no trace within her of the idealistic girl who loved Robert de Lascaux a lifetime ago, she agrees to marry him to advance the fortunes of her son, to avoid the nunnery, and most importantly - as an easy way to gain access to the man upon whom she will avenge Wales.

When Robert is asked to marry the woman he has loved for eighteen years, he never hesitates. But the lady who greets him at the altar has so little in common with the girl he adored that he begins to doubt that there is anything left of her bold and passionate younger self. Marriage to her might gain him the fortune and status his family has always wanted, but no wealth has ever mattered to him as much as Eluned has. And she, it seems, does not want him at all.

Trapped in a web of intrigue, revenge, and desire, they cannot forget their past – but can they share a future? The fascinating world of medieval Wales is continued in this riveting companion novel to The King's Man.