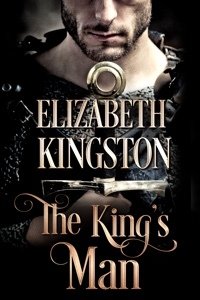 A signed paperback copy of The King's Man

This item is non-refundable.

Ranulf Ombrier’s fame throughout 13th century England for his skill at swordplay is rivaled only by his notoriety as King Edward I’s favorite killer. Ranulf's actions have gained him lands, title, and a lasting reputation as a hired butcher. But after years of doing his king's bidding, he begins to fear for his mortal soul and follows his conscience away from Edward, all the way to the wilds of Wales.

Gwenllian of Ruardean, Welsh daughter of a powerful Marcher lord, has every reason to leave Ranulf for dead when one of her men nearly kills him. As a girl she was married by proxy to a man Ranulf murdered, only to become a widow before she ever met her groom. In the years since, she has shunned the life of a lady, instead studying warfare and combat at her mother’s behest. But she has also studied healing and this, with her sense of duty to knightly virtues, leads her to tend to Ranulf’s wounds.

Saving her enemy’s life comes with consequences, and Gwenllian and Ranulf are soon caught up in dangerous intrigue. Forced together by political machinations, they discover a kinship of spirit and a surprising, intense desire. But even hard-won love cannot thrive when loyalties are divided and the winds of rebellion sweep the land.